So I realized I've never posted anything about France.

Email ThisBlogThis!Share to TwitterShare to FacebookShare to Pinterest
Labels: France

Here are the long awaited Sapo pictures! Original post HERE.
Posted by A. at 10:34 AM No comments:

I thought I'd share this pretty cute video with you. It is the story of what happens when Peru, Nebraska is visited by Peruvians from...Peru. The big one.

I was sure I was going to buy a house this summer. Excessive amounts of time had been spent picturing everything I wanted, down to how the sunlight would come into the windows. After over a year of living out of a suitcase, this house was the one thing I had my heart set on; it was to be mine -- a monument to my independence and success.

Well, I did in fact buy a house this summer.

It wasn't in the US, and I'll probably never spend a night in it. It won't store all my junk, and it is not somewhere for me to hide when graduate school becomes stressful. I have no idea how the light comes in the windows, or if it even has windows. But I think it may be the single greatest use of money in my life.


The House
One of the best parts of my job was getting to talk to my workers. With my hodge-podge of Spanish and a lot of ridiculous gestures we were able to talk about a surprising array of topics. They taught me jokes to tell at parties (and I always, always forgot how the punchline went), they described local holidays, and they even told me their children's names.
They told me that they didn't always buy mangos for juice, because 2 soles (less than dollar) a kilo was a lot for them. They told me about their husbands who didn't work, leaving them the sole bread winners. They told me how they had to work in the agriculture fields, from 4 am to 5 pm --until they got blisters on their hands -- for less than $15 a day. They told me how they had wanted more of an education, but they had been beaten by fathers who insisted it was too expensive and that women didn't need to go to college anyway.  They told me how thankful they were to have work with us, to be able to help support their families; they were glad they had the job -- the job of lifting hundreds of buckets of dirt in the boiling sun for me. For less money than I spend on a dinner out with friends.

They never said these things expecting pity, or trying to get anything from me. They told them as fact, as the way their lives were every day. They just wanted to be heard, to have someone know their stories and the way things were in their world.
Finally, near the end of the trip, I heard how one worker desperately wanted to purchase the house she was renting, to have a permanent space for her family. She needed a fairly large amount of soles, and raising the money was impossible. Banks wouldn't loan her money, because they wanted her to have the deed of the house first for collateral...which negated the whole purpose of the loan.
So, my roommate and I decided to help. We were so very lucky to be able to step in where the banks had failed; we would buy the house, and she could pay us back. The amount we paid was possibly less than you spend at Starbucks in a year. Think about that.

It made me realize how incredibly unbalanced the world is right now; how ridiculous the life I lead really is. Shrugging and saying "well life isn't fair" isn't going to change that. It'll take real action on our part -- the willingness to make some sacrifices so that others can have a better quality of life. And I'm very happy that we were able to make a small step towards starting that this summer.
I don't think we can all go out and save the world right now, today. But we can try. I shall try.  Because if I don't, I think it will physically hurt me to continue living my life in the same manner as before. So just do me a favor tonight: look around you and think "what is one luxury I really don't need? What is one thing I could give up, and instead use the money to help others out in some way?."
Think about it.
Posted by A. at 5:40 PM No comments:

Here is the photo proof of the giant jug of honey. 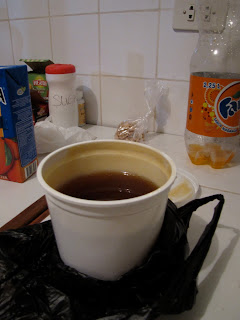 Email ThisBlogThis!Share to TwitterShare to FacebookShare to Pinterest
Labels: Do you know the honey man, Peru

While I recover from a ridiculously long trip home, I figured I'd give you some pretties to look at. Click on the images to see the big versions.

Every country: By the time I die.
The ones left: A lot. Yea, I need to start moving faster.

Sign up to get email alerts when I publish! (NO SPAM, promise)